Welcome to the third edition of Uplifting Story.

One story shifts the dial. Collective storytelling makes the change.

Can there be uplift in an uncertain world?

Approaching my eighth decade—I know, it’s weird to contemplate that span of time—I can’t recall a time of greater uncertainty. Or of greater hope.

Born seven years after the end of the Second World War, memories of my parents talking about their experience of that conflict remain fresh.  My father was a Lancaster pilot with a 50 percent chance of survival every time he took off.  You cannot get much more uncertain than that. But he went on to enjoy a 43 year long flying career. 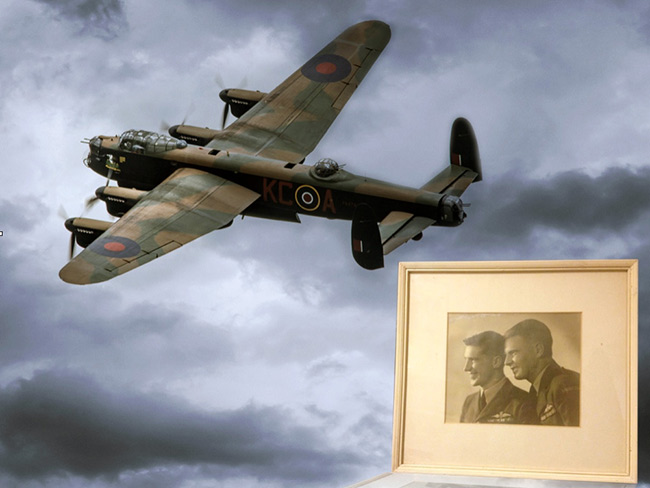 In the sixties, folk were more concerned with Cold War posturing.  It was heightened for 13 days in 1962 as a nervous world watched the US President John F Kennedy and Soviet Premier Nikita Khrushchev play Russian roulette with Soviet nuclear missiles, placed and pointed toward the United States from the Bay of Pigs in Cuba.

There was more uncertainty for my grandparents watching their children shedding the shackles of a lingering Victorian social constraint.  But, for a somewhat sheltered teenager living in Africa, what was happening overseas seemed exhilarating.   I couldn’t wait to get there, wear flowers in my hair, burn my bra, and march for Feminism—an entirely new concept to a naive young girl, but I liked it a lot.

The small African country I lived in declared unilateral independence from Britain in 1965. The United Nations immediately imposed sanctions and suddenly the only countries in the world I could visit were South Africa, Chile and Israel. The latter two weren’t on my bucket list.

Even though swinging England and Carnaby Street were a distant memory when I finally made it to the UK,  the seventies had a lot going for it as a decade.

The best ever music. Who experienced it could ever forget hearing Pink Floyd’s Dark Side of the Moon for the first time, or attending the Hammersmith Odeon to watch Ian Anderson of the legendary rock band Jethro Tull, bounce single legged around the stage playing his flute and singing Aqualung.

It was during this decade that I recall the lid being lifted on the state of the environment, mostly through the lens of over population.  Not though in any country where neo-liberalism—the demand for an insatiable private sector growth together with social program austerity— was the focus as in Britain led by Margaret Thatcher.

None the less the seventies rolled by for a young white woman doing all the things I’d been raised to do— travelling, following a career path, marrying, starting a family.  For me, there seemed no discernible threat to world security.

Then during the late seventies, early eighties, in the dying decades of the cold war, nuclear conflict was suddenly back on the table.  It was impossible to wrap our heads around the idea that leaders would blow the world up.  Sting captured our sentiments in his song, Russians —our only hope of avoiding a nuclear catastrophe rested on the notion that ‘the Russians love their children too’.  Clearly they did.

Despite the threat, the eighties kicked off for us in jubilation. Rhodesia became Zimbabwe.

Immersed in raising two small daughters, we soon faced a desperate decision.  Despite the heroic rhetoric, it was clear that the newly entrenched President of Zimbabwe, Robert Mugabe was barreling down a path that would see a once established economy become the poorest country in the world within two decades.

Heartbroken, we said goodbye to our family and friends, my business and Africa, pocketed our leaving allowance of $600 and immigrated to Australia, birthplace of my husband Roger—the finest decision of our lives.

There is great uncertainty in immigrating.  Still, Roger walked into the largest PR Company in Australia ten days after our arrival and met the Managing Director.  He said, ‘So you’re looking for a job mate?  Sure, we’ll give you a go.’  It seemed the eighties in a Hawke-led Australia was wide open for us to make a future for our family.  After all, what could be wrong with a world in which your Prime minister cried with joy over a boat race?

The decade ended promising the possibility of global unity symbolised by the fall of the Berlin Wall in 1989, re-integrating Germany after 28 years.  It sparked a revolutionary wave with reform movements rising across the communist block.  Solidarity became a powerful word to lead us into the nineties. 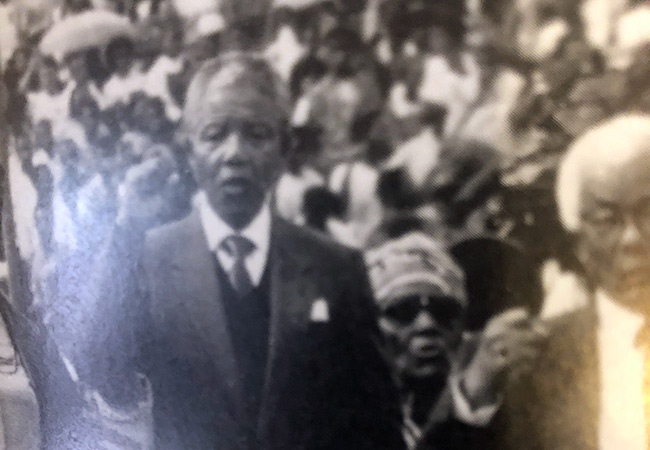 Indeed, politically the world seemed poised for peace.  The decade kicked off with Nelson Mandela walking free in 1990 from his 23-year incarceration on Robben Island, to lead South Africa, the rainbow nation through truth and reconciliation.

For us, the nineties came and went in a flurry of raising teenagers.  It seems a blur now. I’m not sure if that was the memories of endless teenager ‘before, after, and after after’ parties, or because we also had a bevy of hard-partying friends.  Either way, I recall little uncertainty as our business ArtWords, started in 1992, grew into a solid marketing communication company.

We all survived the first night of the noughties and Y2K— the fear that computers would not shift from 1999 to 2000 correctly, plummeting aircraft from the sky and sending the share markets into turmoil.  We’d have to wait eight years for the foibles of Wall Street financiers packaging risky loans—likened to ‘building an every growing tower built on a foundation of sand’— to do that.

Before that, we faced a most catastrophic event that would hurl humanity into a period of lengthy uncertainty.  Who will ever forget watching those planes and burning twin towers crumble over the skyline of New York—images of our worst nightmares. It changed air travel for all time.  And yet we still flew.

During this decade and into the next, various presidents of the US and their allies would deploy troops into different countries to find weapons of mass destruction or hunt down dictators and despots.  Did the resulting loss of life cause anything but more suffering, more refugees, more war, more death and mayhem?

The noughties ended disastrously for us. The Great Financial Crisis of 2008 collided with an ignominious business betrayal and crashed our once healthy business.   So, we started a charity.  It was financial madness, but wonderful and life affirming, despite forcing us to leave our home of 26 years.

It ensured there was no choice but to make the twenty tens a decade of reinvention as a solopreneur.  When I stood on the Melbourne TEDx stage in 2014, to do a talk called Tell your story, save a life, which told the story of the charity, it seemed I was on track.

Three grandchildren later, it would take another six years, to this strangest of all strange years 2020, for it to culminate in its fullness.

The start of the twenty twenties delivered a welter of uncertainty in which the word ‘unprecedented’ took on a new and sinister meaning— fires, floods, and pestilence.

Where could we look to find uplift in this?  For most of the year, I offered stories of hope.  And there were many—of  people who used their innovative, energetic, humanitarian spirit to resolve our individual, professional, and global problems.

Then on November 8, 2020, after months of hard lockdown in Melbourne to contain Covid-19, and four days of anxiously waiting for the results of the US election, we heard first from Premier Dan Andrews that in Victoria we were on track toward living a ‘Covid-normal’ life after nine days of zero cases, zero deaths. 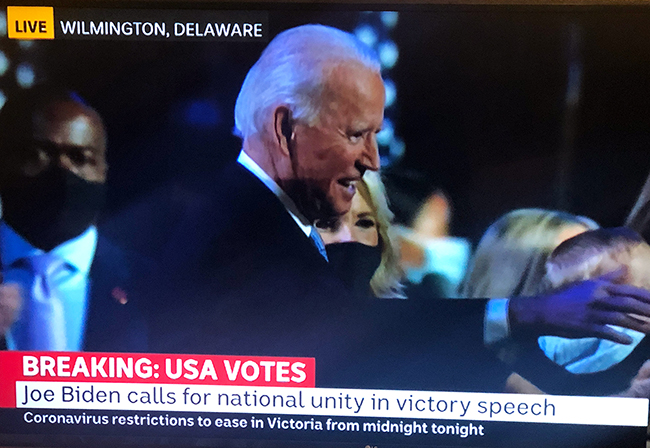 There would much to say about the spectre of the early twenty twenties being dominated by the current leadership in the United States.  Happily, there is no reason to now.

There are many people better equipped than I to comment on the politics and economics of a Democrat victory.  But, for the fact that both spoke to addressing climate change, systemic racism and social injustice, we should be elated and uplifted on behalf of the people of America and the citizens of the world.

One commentator said, politics is after all a narrative, a story told to the people.  The story we heard was of science, hope, unity and truth.

All the people of America, including those who did not vote for the Biden Harris team, and the rest of the world, will watch to see how they deliver it.  Our greatest hope for the twenty twenties should be that we are all witness to an unfolding story that fulfils the promise.

This random meander through seven decades is a personal reflection which may only partly mirror your experience, but it illustrates how we’ve always lived through uncertainty.

The greatly uplifted feelings I had in response to the promise of hope on November 8 2020, were but a speck of dust in an ocean of joy that engulfed so many here in Victoria, the US and globally.

I observed as the day passed, a shift in mood which grew exponentially toward a willingness to re-engage, get down to it, and make a difference.  This is what stories of hope do.  It’s the chaos theory of storytelling unfolding minutely all over the world, making sense of the confusion— impacting on how we feel, what we do and what we must change.

In his opening address as he launched the World Economic Forum’s (WEF) Great Reset,  executive chairman and founder, Professor Klauss Schwab said this:

We have a choice, to remain passive which would lead to the amplification of many of the trends we see today, polarization, nationalism, racism, and ultimately increased social unrest, or we can build a new social contract integrating the next generation; we can change our behavior to be in harmony with nature again; and make sure that the technologies of the 4th industrial revolution are best utilized to provide us with better lives.  In short we need a great reset.

In their victory speeches, President and Vice President Elect, Biden and Harris mirrored these sentiments exactly.

Can you think of a better summary of what each of us can contribute to in the forthcoming years post Covid?

The WEF believes that it’s the storytellers that can save the planet.  They believe that by providing us solid science— one of the pledges from the Biden Harris team— and free footage, we can bring the climate catastrophe alive.  What they provide is almost always stories of hope. 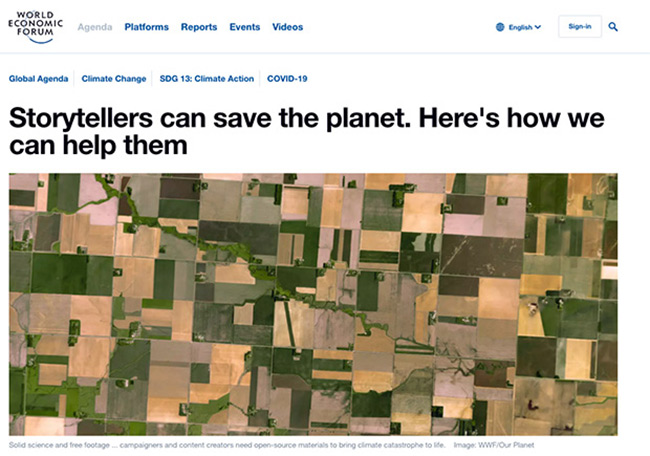 There is no better time than NOW to share our collective and uplifting stories of change, so I invite you to visit the WEF, find a story and share it with us at the next Uplifting Story gathering. They are every two weeks on a Friday afternoon, and an opportunity to wind down and revel in hope.

You can find the list of dates in the Humanitix link below. We look forward to your company.

The Story Whisperer
Scroll to top